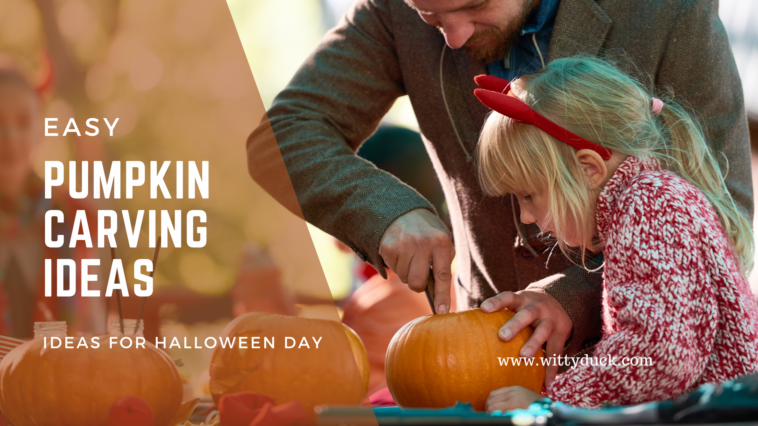 It is believed that the custom of making jack-o’-lanterns at Hallowe’en time began in Ireland. The original carvings were meant as a deterrent to scare away Jack from homesteads. After many Irish families immigrated to America in the 1800s, they found that Pumpkins made for excellent carving specimens, especially because pumpkins didn’t really grow well in Ireland. They often carved scary faces and placed the lanterns near doors in order to ward off evil spirits. Symbolically, the pumpkin is often linked to rebirth and fertility, and they also symbolize harvests and crops. They fit the season in which Halloween falls every year. For those who go ‘trick or treating’, a luminous pumpkin on the stairs is the symbol that those who live there want a visit. Once it was started, Pumpkin Carving Ideas became widely popular among people and they started using it. 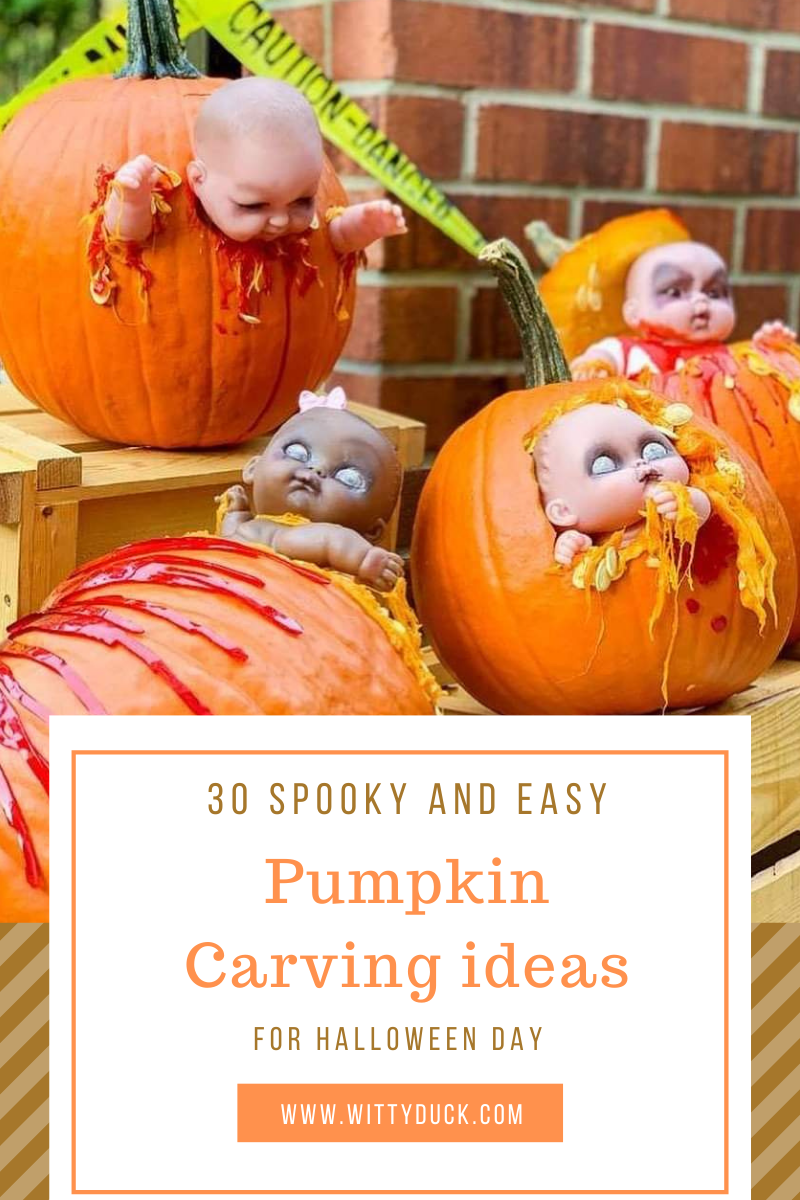 Given below are some of the Pumpkin Carving Ideas

Nothing says Happy Halloween like a scary hobgoblin, all scowls and just looking for trouble. And this grinning prankster is one of our easiest Jacks to tackle; just transfer the pattern, carve out the eyes, and finish with the jagged smile. The traditional pumpkin craving. However, this is the most easiest Jack you can carve!

Before we carved pumpkins, the Irish chiseled creepy faces onto turnips. Pumpkins with ghoulish faces and illuminated by candles are a sure sign of the Halloween season. The practice of decorating jack-o’-lanterns originated in Ireland, where large turnips and potatoes served as early canvasses. This was done to frighten away Jack’s wandering soul. When Irish immigrants moved to the U.S., they began carving jack-o’-lanterns from pumpkins, as these were native to the region.

Just follow the trend and keep an eye on the neighborhood with these creepy carved pumpkins. While mostly people choose two-eyed or other designs for pumpkin, one eyed pumpkin is qua;;y scary. Scare away your neighbors and naughty kids with this pumpkin craving idea, in this pumpkin.

Baby Yoda has been an inspiration for everything from pet Halloween costumes to Echo Dot stands. Pumpkin carving always seems like a fun fall activity to prepare for Halloween. So why not let the beloved character take the spotlight on your pumpkin?

This two-in-one pumpkin is scary, creative, and funny all at once—the Halloween trifecta. The tricky part is cutting the mouth just the right size to fit a smaller gourd. You can help hold it in place with toothpicks.

Place a scared little pumpkin inside of your jack-o’-lantern, and you’ll quickly set a spooky scene. Carve an opening out of the top or bottom of the large pumpkin, making sure it’s wide enough to fit a smaller pumpkin or gourd through it. Scoop out the seeds. Draw eyes and a mouth on both pumpkins with the marker. Carve out with a knife for the larger pumpkin; use the melon baller for the smaller pumpkin. 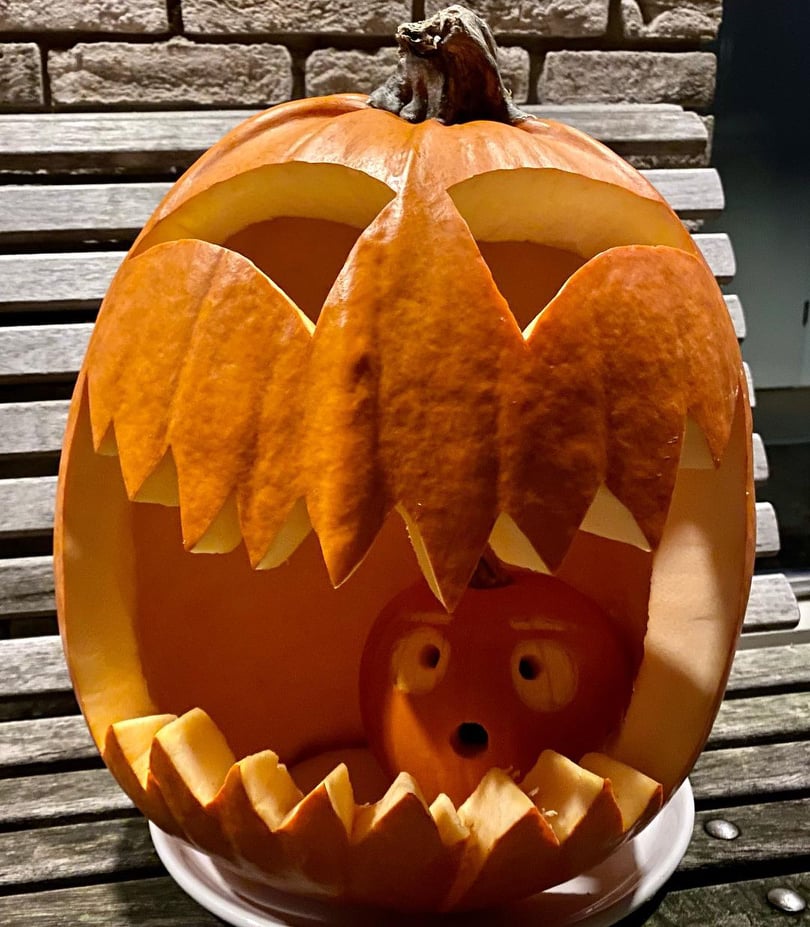 Carve out your pumpkin and stick anything in it. Add some “jail bars” for a creative (and totally hilarious) Halloween display. You can additionally add some spider and put up a ‘JAIL’ heading above it. This gives an innovative and cool vibe. 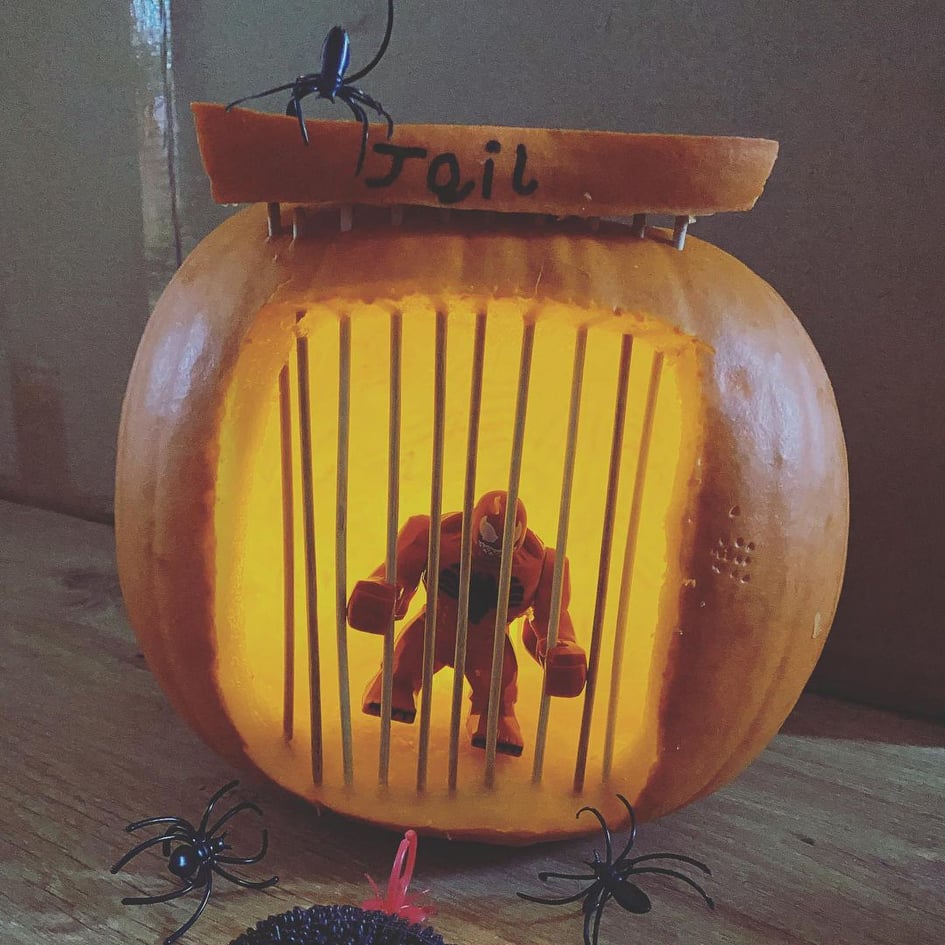 Crave the face and mouth normally and then stick it with small wooden sticks. This creates a face-house image. Its a new concept and very easy to work it. If you are just getting started, this can be a good try definitely.

While the general tradition is to crave a scary pumpkin face, you can always think out of the box and this is something out of the box. A combination of jute threads, accessories and most importantly the seeds, this pumpkin craving idea is just wow! It is unique in its own way.

This cute cat pumpkin only looks hard to make. Hollow large pumpkin from base; carve mouth and eyes and cut nose. Attach toothpicks by its side. Attach leaves all around his face to give a fur look and your cute cat pumpkin is all set.

If you’re a stickler for a traditional face, give your pumpkin a new ‘do with a black nose. Scare away everyone with this angry look of your pumpkin. Remember you don’t have to crave out the eyes and mouth entirely/ Just peel off the first layer and draw black angry eyes on it. That’s it and you are ready!!

Your spy pumpkin is ready to do an extra task apart from scaring away everyone. This concept has evolved lately and is being used since then. It looks cool and gives a Halloween vibe. Although it maybe a little difficult but it is worth the efforts. Don’t forget to take two pumpkins!!

Instead of one large jack-o’-lantern, craft a giant skull and place a bunch of mini ones above it. It’s a tedious task but worth the time and effort! This looks cute. You can go ahead and color the smaller ones as well. Try to make your bigger pumpkin as funny as possible.

Why not go the unexpected route with a Halloween pumpkin carving dedicated to pigs? This one puts on a mean face that’ll spook any passerby. Adding a whole bunch of extra things apart from the pumpkin itself makes it look more attractive.

A clever mix of flowers, petals, dried leaves, and artificial foliage makes this simple pumpkin a natural wonder. No cravings but just external decoration and your cute Halloween pumpkin is ready. 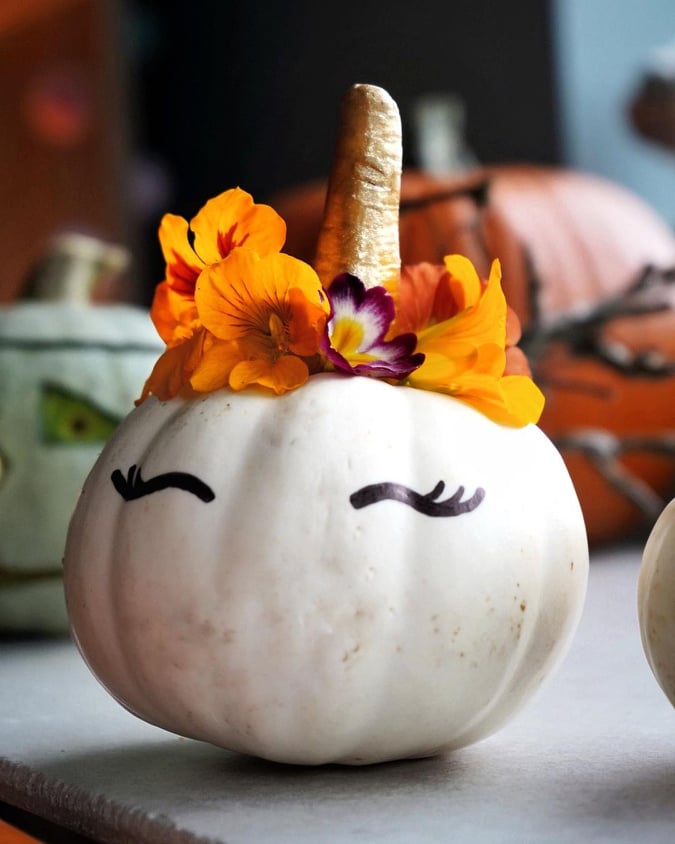 Make this bewitching display at home by first hollowing a green heirloom pumpkin. Carve out mouth and eyes, then attach parsnip nose with toothpicks. Leave the same old yellow pumpkin and try something new. This can be much more scarier than the yellow pumpkin. 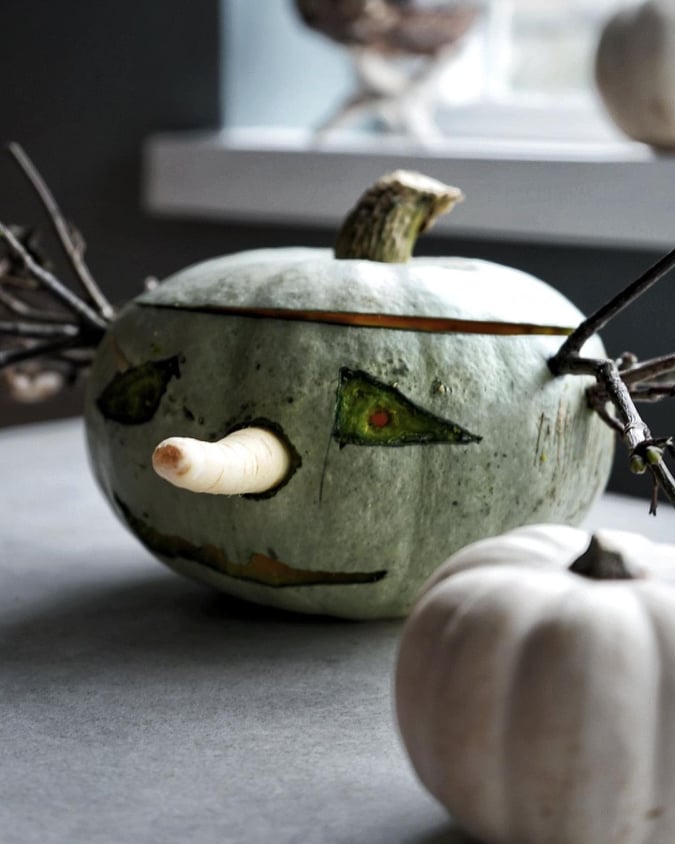 Just get creative with your pumpkin and crave whatever you like. One of the common ideas is to crave any animal and light it up. Horse is widely chosen as it creates a beautiful shadow and reflection.

This funny pumpkin face is easy to create. Just trace your face design with a marker, then carve out the mouth. Your pumpkin needs only one craving and then you can attach the teeth with pins, pastes or toothpicks. Stick multiple eyes on the pumpkin and it’s done. It is as simple as that. You dn;t have to invest much time and still get a good pumpkin craving for the Halloween.

While working on a pumpkin craving ideas, you can choose any theme to design. The Jurassic Park design being highly fretful one is often selected for this purpose. Craving out the exact shape and lighting the inside just makes it more scarier.

Carve sloppy eyes and a jagged mouth onto your pumpkin. Crave the mouth part very carefully. Keep the teeth firm and attach braces with it. Make sure your pumpkin looks toothy and scary.

Hollow out medium round pumpkin from the bottom. Carve two oval eyes, then cut two smaller circles from leftover rind for pupils. Here the eyes and mouth are sealed kind of. They are tied with jute threads to give the pumpkin a deadly look.

Small curved pumpkins make perfect accent pieces wherever you decide to display them — like in a faux cast iron planter created with black spray paint. And the other part of the face is rugged off. Don’t peel off the face too deep. Attach an external eye onto the pumpkin and then its done.

With this witchy pumpkin, you’ll want to start by carving out the witch first and then moving on to the stars. Position the pumpkin so the stem is centered where the nose should sit. Using the washable marker, draw on eyes, eyebrows and a mouth. 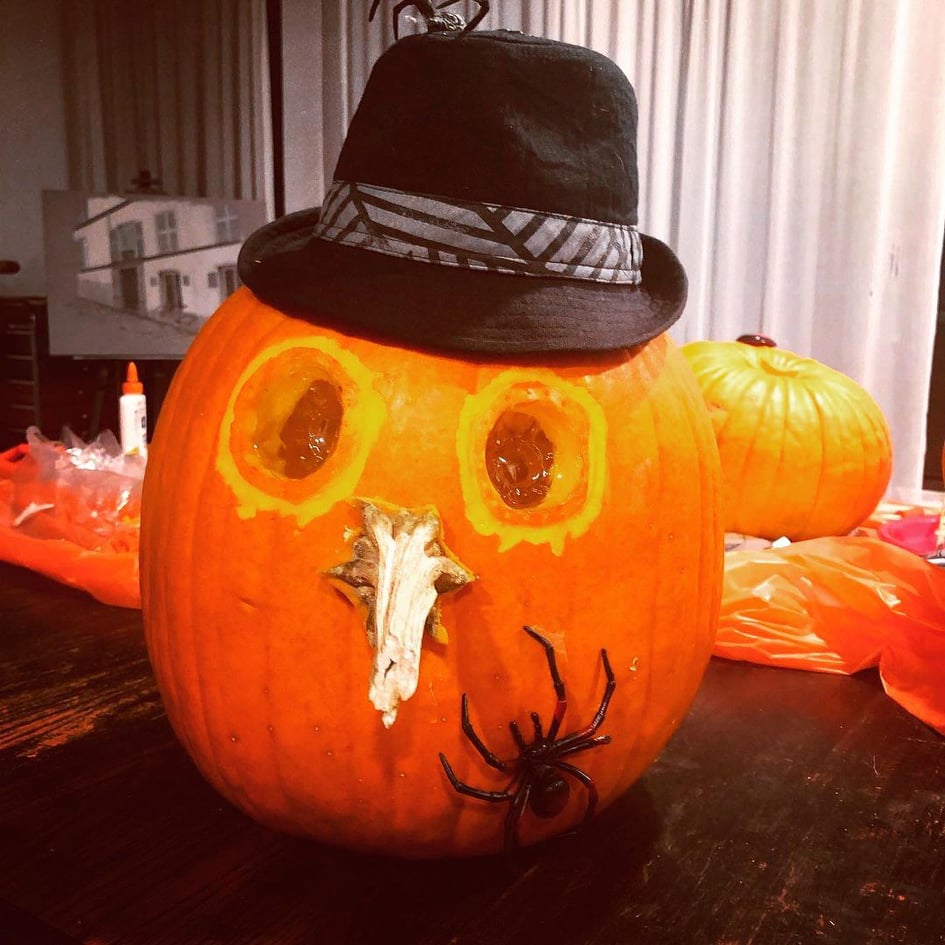 You can create this elaborate pumpkin by printing out an intricate damask pattern and then tracing it. Stencils will help you make those touch precision cuts. It is a bit difficult and requires a lot of time to be done. 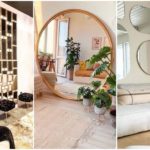 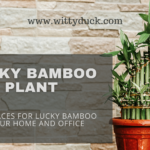